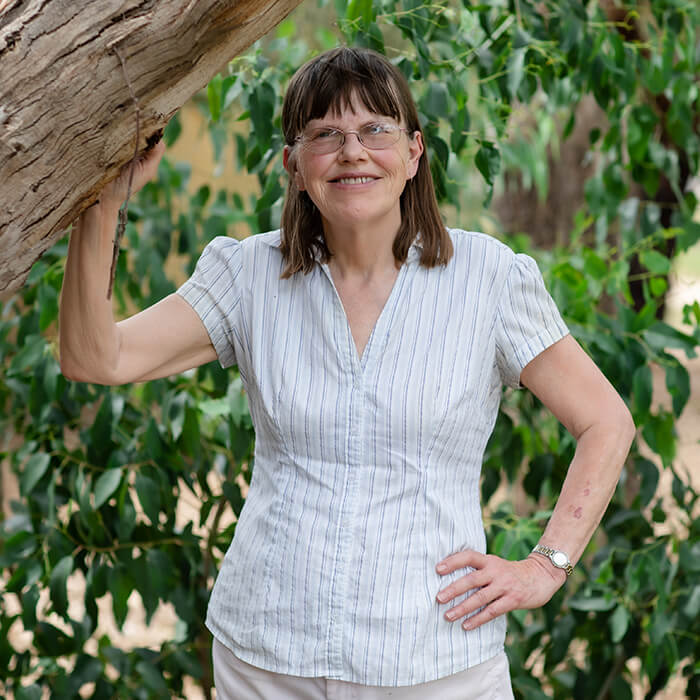 Mary’s daughter, Anna, is serving a 17‑year prison sentence after killing her housemate in 2015.

Mary said Anna began to have social and emotional challenges when she started primary school, where she struggled to fit in with her peers. Anna developed an eating disorder at age 14 and in her early 20s turned to drugs.

Mary said Anna had an endless string of encounters with crisis and emergency services.

I’m glad I couldn’t know what 2014 would bring to us. The nights of screaming and pleading, begging her to choose life. The locking up of knives, the frantic calls to police, the ambulance trips to psych wards.

Mary and her husband, John, sought help from numerous places, but Anna did not receive an in‑depth assessment or connection to the type of care she needed.

I trawled the internet and called so many programs, always with hope in my heart that these might be the people who could save my daughter. She was granted a few hours of advice or therapy here or there, while she became increasingly suicidal and John and I became increasingly exhausted.

Mary tried to get Anna into rehab. She was given an appointment for a detox facility 10 days later, by which point Anna had disappeared from home, which Mary said was increasingly common.

The window of opportunity for someone like Anna to be open to treatment is small—too small for the waiting lists of government‑funded facilities.

Following a violent outburst at home and threatening suicide, the police took Anna to an emergency department, where Mary said she was devastated when she was told Anna would not be admitted.

Anna was admitted to detox programs on two separate occasions. Mary said it was a relief to have Anna in a safe location so Mary and John could have some respite.

Unfortunately, after detox, Anna reverted back to drugs. Mary said she became increasingly disturbed and delusional. Mary said it was at this point they made the difficult decision that Anna could no longer live with them.

Following another incident where the police were called, Anna was admitted to an involuntary ward and later discharged to a man, previously a respite carer for Anna and her family, with whom she had formed a relationship.

I certainly wanted to tell the authorities at the psych ward what to do. ‘Don’t let her go! She is not capable of making a rational decision!’ She was still desperately delusional. … She thought the man she had called … could protect her.

Anna was once again admitted to a secure inpatient ward. Mary went to visit and said Anna was clearly distressed.

She didn’t want to leave that place. She wanted to be kept there, contained, because she knew she couldn’t control herself. But she told me the person in charge of making that decision had spoken harshly to her, saying the psych ward was not there to provide accommodation to people just because they wanted it.

Mary wishes authorities had consulted the people who knew Anna best: her family and long‑term doctor. Mary thinks this was a key reason why they failed to recognise the severity of her mental illness and distress.

It was not a straight line, and some days were worse than others; however, there was definitely a trend that could have been picked up had a profile of her with my regular input been developed of Anna along the way.

Ultimately, Mary believes that Anna, who was usually articulate, polite and well presented, and came from a loving, supportive family, lacked many of the red flags clinicians would look for in a brief risk‑focused assessment.

Mary speaks of the anger she felt upon hearing of what Anna had done.

I wanted to line up all the authorities we had met from the mental health system and scream at them, ‘Again and again you turned her away. You refused to contain her. You said she wasn’t bad enough. Well, now she’s murdered someone. Are you finally convinced that she’s BAD ENOUGH?’

Mary feels it is a tragedy that ‘it took the life of a good and innocent man to deliver Anna to safety’. Mary has written a book about Anna’s experiences that led to the ‘unimaginable horror’ of her child taking another’s life.

There were failings that happened into the lead up to it, but both Anna and us as a family absolutely believe that she deserves to be punished and she got a fair sentence.

Despite her history, Anna’s mental illness was appropriately treated only after she had been jailed. In Mary’s experience, drug and alcohol services thought Anna’s mental health problems were too tricky for them to handle, while mental health services offered only brief crisis interventions and inpatient stays.

Mary often reflects on where things went wrong. Mary thinks they should have sought guidance when Anna was still a child, but ‘at the time we had no idea how her life would turn out’.

In a future mental health and wellbeing system, Mary would like to see better information flow between services such as the police, hospitals, GPs, social workers and the families of people experiencing mental illness, and better integration of information from different presentations over time. She also believes that integrated care planning is critical to providing effective, timely support.