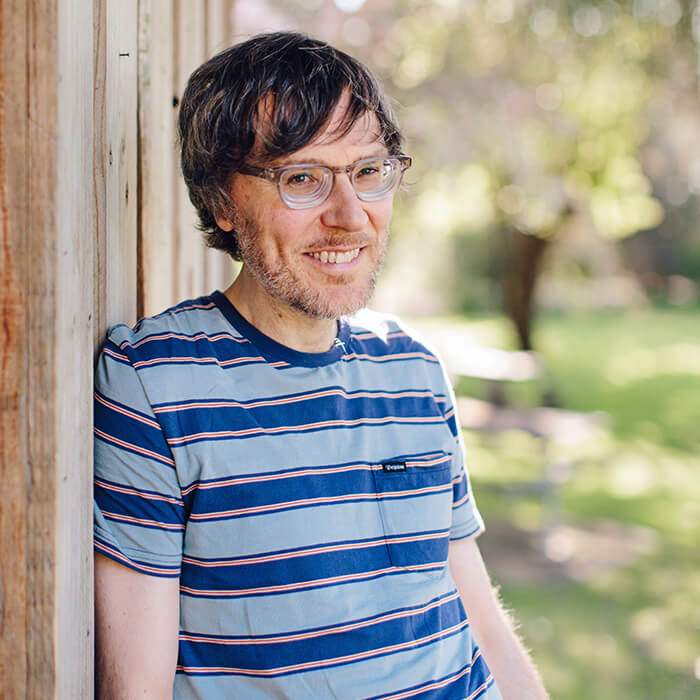 Justin Heazlewood grew up in Tasmania in the 1980s and 1990s, an only child who never met his father. Justin became aware that ‘something wasn’t right’ at a young age.

At seven I remember lying in bed while Mum wailed in the bedroom next to mine … I wanted the crying to stop. This is my first memory of monitoring Mum’s illness, something I would spend a lifetime doing. I didn’t know it then but I was a child carer.

Justin’s mother lives with a diagnosis of schizophrenia. By age nine, Justin could see patterns forming in her behaviour. He recalls that she was well half the time and unwell half the time.

Justin describes his Nan and Pop as his main source of support. He would call them often in his early teenage years, as his mother cried uncontrollably, and ask his Nan to come and get him. She was reluctant to interfere, but told Justin he could call whenever he liked.

When he was 14, Justin secretly made an appointment with his mother’s regular GP.

I told her in detail how bad Mum was. The crying, the swearing, the violent episodes. The GP said something about doctor–patient confidentiality and that was that.

Justin says it is inconceivable to him now that a doctor listened to his story and didn’t take any action. He describes this as an appalling result and says it discouraged him from seeking help again for a decade.

When I look back on my experience I am struck by the complete lack of support I received. At school there was not a single lesson spent on educating us about mental illness or self‑care. At no point was the role of the school counsellor adequately explained to us. I was never prompted to tell anyone about any of my problems at home. Meanwhile Nan was delivering the message that I had to remain strong and carry on. There was definitely a stigma around mental illness and our family kept a tight lid on the silence around Mum’s story.

Having fretted over his mum for years, Justin has also experienced challenges to his own mental health, both in his teenage years and as an adult. He experienced what he describes as a nervous breakdown at age 33.

After years living interstate and a period in which he distanced himself from his family, Justin returned to Tasmania in July 2019. His mum was accepted into the National Disability Insurance Scheme in December 2019. Justin says he and his mum are now closer than they’ve ever been.

I have accepted that I must carry the burden of being an only child who cares for his Mum. At least now I am able to do so with the support I’ve always needed.

As Justin Heazlewood, son of Maureen Heazlewood, my whole life has been forged by schizophrenia. It has shaped and misshaped the person I am. The secret life of being a child carer has taken a personal toll on me. I now experience mild depression and generalised anxiety disorder as a result of my complex developmental trauma … I continue to accept my limitations while believing that recovery is possible.

Justin is now an Ambassador for Satellite Foundation, a Melbourne‑based not‑for‑profit that supports young carers with a range of peer support programs, workshops and respite through activities such as overnight camps.