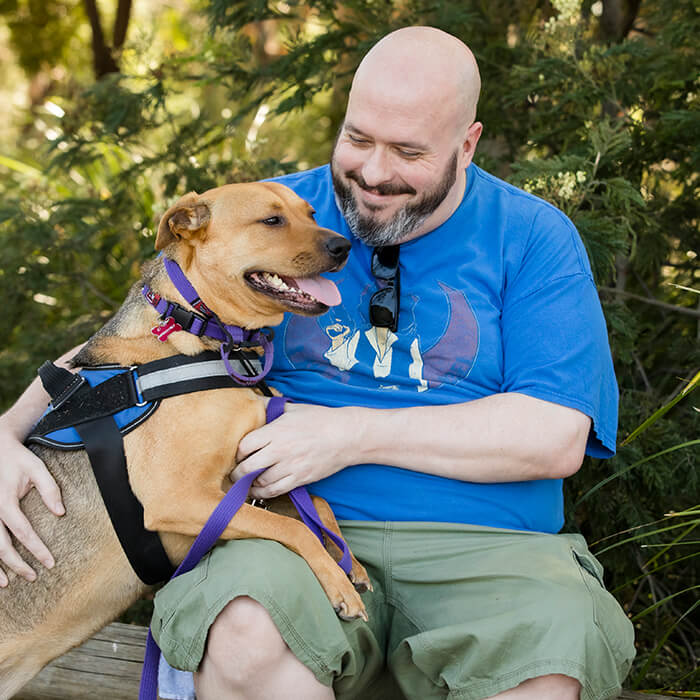 Dave’s dog, Millie, has been a huge emotional support for him and also gives him a reason to get out of the house on a daily basis to exercise. This is something he finds very important, knowing the detrimental effects his medication can have on his physical health, which Dave said includes increased risk of cardiovascular disease, stroke or diabetes.

When I adopted Millie, I did, partly, knowing that she would give me a hell of a lot of emotional support, but also that she would help me get out and exercise when that’s the last thing I really feel like doing. Because I’m held accountable to someone who I love and care for.

Dave found that Millie had a lot of energy and he ended up spending a lot of time with her at the dog park. He found it helped him get over social anxieties by talking to other dog owners.

I got to know the other dogs before other people. I feel like dogs are this great equaliser where I can more easily get over my anxiety about social interactions. Because you can talk to their dog, they can talk to you as their dog replying.

Connections Dave found at the dog park have turned into strong friendships.

It just turned out that there was this group of four of us, spending probably three hours a day together at the park, just talking about everything and nothing really. It ended up being this great friendship.

Dave spoke about opening up to one of his friends about difficult times in his life.

One guy worked at the Country Fire Authority. We eventually got talking about situations where people were wanting to end their lives, and talking about some of the interventions, crane rescues and things like that, that they’ve done at the fire authority, but also sharing my experience of being at that point of wanting to end my life.

Dave said there is a real community at the dog park, where you often hear about hardships that people are experiencing and you build meaningful connections. He said he always has someone to talk to at the dog park, and it has significantly helped with feelings of loneliness and isolation.

Isolation has always been a bit of an issue for me. I tend to want to withdraw from the world when I’m feeling a bit wrong. I can’t get away with that with Millie.

Symptoms come and go depending on the day, and it doesn’t really alleviate any symptoms, but it does provide that sense of connection to people around you that I definitely lack at times.

Following a couple of days where Dave was not at the park, one of his friends messaged to check he was okay.

He just messaged out of the blue and said, ‘I haven’t seen you a few days, I just want to make sure everything’s okay.’ That was really nice. Here is someone that I’m just a fellow dog owner that I get along well with, just checking up on me because we’ve shared a lot of our lives together and shared dog company.

Dave said having Millie helps with his ‘big feelings’ and gives him company, but finding the community at the dog park has been ‘amazing and really unexpected’.

Dave says that the feeling of isolation has been more pronounced during COVID‑19, even on his visits to the dog park.

You can’t see people’s facial expressions walking in the park and it is harder to talk. But even if you don’t talk, there’s still that feeling of being connected through our dogs. And there’s always a friendly ‘hello’ or even the people that you don’t talk to make eye contact and nod.