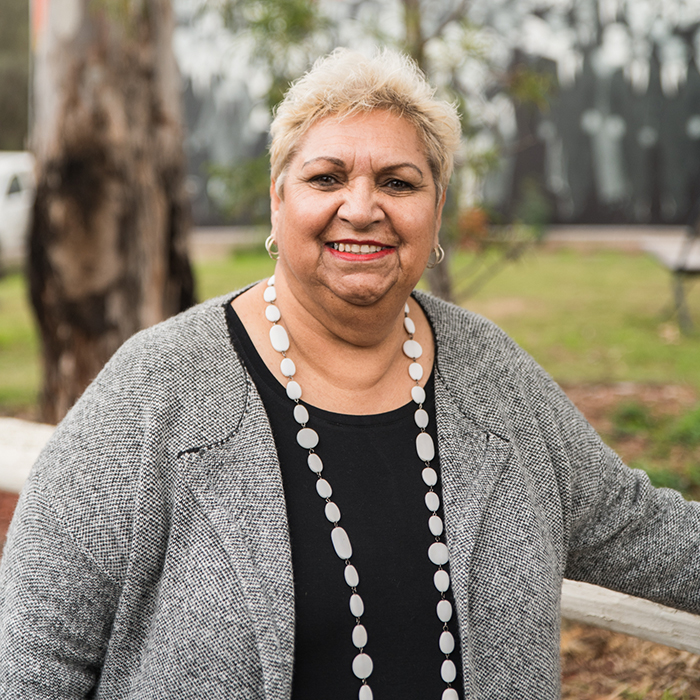 Aunty Nellie Flagg was born in 1957 and grew up as the second-last of ten children.

My life growing up was one of joy, but also a lot of racism that impacted on me, my family and the Aboriginal community.

Aunty Nellie told the Commission about the impacts of racism, recalling times she wasn’t served in shops and when other girls at school would talk to her on the sports field but ignore her elsewhere.

I believe that they did not see me as Nellie; they see me as an Aboriginal person.

She also talked about the impact of trauma and loss on her and others in the Aboriginal community and said that often the trauma comes from family stories, including experiences of death or abuse, which can have a significant impact.

When her son tried to take his own life, he found an Aboriginal counsellor who made a difference.

He didn’t have to explain his culture; the Aboriginal counsellor made him feel at ease because he understood where my son was coming from.

As part of her work with government and community organisations and in Aboriginal Affairs for more than 40 years, Aunty Nellie worked as a suicide prevention worker in an Aboriginal social and emotional wellbeing team.

A lot of our young people die by suicide because of the traumas that they have felt or were dealing with. It was heartbreaking to hear these stories and see the impact with the communities.

For Aunty Nellie, trauma and loss in her own family led her to experiencing depression. She also recognises the effect of hearing other people’s stories as part of her work.

I walked this journey with the people who told me about these things. This affects me and my mental health because I am living not only with my own traumas, but also with other people’s traumas.

When talking about challenges with the mental health system, Aunty Nellie states the importance of access to culturally sensitive services, and also the way Aboriginal people talk about their health and labels.

When Aboriginal people talk about out health, we don’t do it in isolation.

My family has been afraid of people judging them for their mental health issues. They have been afraid to talk about it for fear of being labelled ‘mental’ or being unable to hold a job.

For future services, Aunty Nellie recognises that more funding is needed and should focus on young people and education. She also refers to more needing to be done to address family violence and drug and alcohol abuse and wants more Aboriginal people to share their stories.

… I continue to talk hoping that other Aboriginal people, women and men, are able to talk about what is hurting them.